Since our last posting, Tony has set up fortnightly group zoom meetings (Azuma for LNER fans) and Roy has again been busy working on Dunallander. The following are photographs and a description of the work Roy has carried out.

The main work which was the restructuring of Dunallander's north boards, which was done to reduce the width of the viaduct board to match that of the main station board after removal of the two superfluous sidings.

This is the north end of the viaduct board, with the main line coming off the viaduct at the bottom left. The reduction  in baseboard width took place at the top of the photo. The baseboard joint edge to the right of the photo has been repositioned to meet the new top edge, with the 'river bed' realigned accordingly. 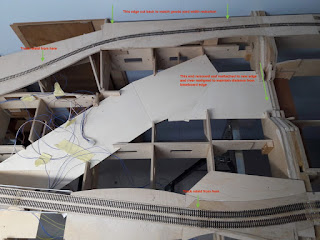 The following photo shows how the main line, which previously curved directly round to the storage area, now turns to the left initially, allowing the radius of the curve to be increased. The following photo shows how by increasing the main line curve radius required the layout to be lengthened at this end (with a matching reduction at the other end). Roy also needed to build a temporary support for the centre point of the track curves to assist in drawing them. (This had been removed by the time the photo was taken. 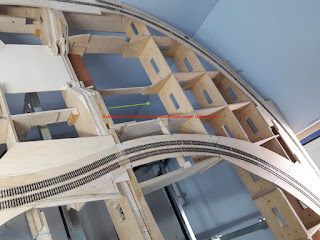 The following photo shows how the curves to the storage area pass in front of one of the doors to the shed. Previously there was a removable section to avoid the need for visitors to duck under the baseboard. Roy decided to replace this with a drop down section hinged at one end. 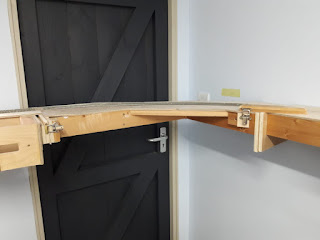 This work has now been completed with the board continuing into the storage area and following shows the section hinged down. 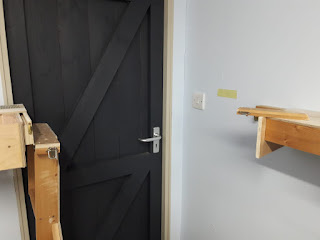 The following shows the extensions from the storage board with brass dowels which locate with apertures on the hinged section. 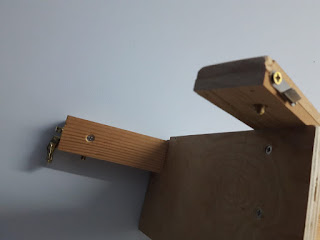